Measuring humidity with a Raspberry Pi

I got a Raspberry Pi a few months ago, and one of the things I wanted to do with it was a bit of hardware hacking (the Raspberry Pi having an easily accessible IO header). But I didn't have a specific project in mind.

So I got a Adafruit Raspberry Pi Breakout Kit, hoping that is would act as a source of inspiration. When the novelty of playing about with LEDs and switches had worn off, I saw that Adafruit also has a very cost effective humidity sensor — the DHT22. The DHT22 is a fully integrated sensor that supplies digital relative humidity and temperature measurements. I have a not entirely frivolous reason to want to measure the humidity levels at home, so this seemed like a good project. But in the end, I chose a different sensor: the HYT-271, (bought from Farnell). The choice was because the DHT22 uses a custom bus protocol, which has to be bit-banged using GPIO pins. Adafruit has an article with sample code to do just that. But that wouldn't leave much for me to learn in the process. The HYT-271 is a little more expensive, but in contrast it uses a standard I²C interface, so it would give me an opportunity to learn something for myself while still staying close to well-trodden paths.

Connecting the HYT-271 to the Raspberry Pi

This part is easy: The four pins of the HYT-271 are wired to the corresponding pins on the Raspberry Pi's IO header (SDA, SCL, GND, and VDD to one of the 3.3V pins).

Because I²C is an open-drain bus, the SDA and SCL lines need pull-up resistors. The Raspberry Pi schematics show that it incorporates 1.8KΩ pull-up resistors on these lines, so external pull-ups are unnecessary. In fact, 1.8KΩ is close to the lowest value allowed for a 3.3V I²C bus (see this page), so it seems unlikely you would ever use external pull-ups with a Raspberry Pi.

I made the connections via the breakout kit and a breadboard. The pitch on the HYT-271's pins is 0.05 inches, but the pins are long enough that they can be carefully splayed to fit in the 0.1 inch pitch of a breadboard: 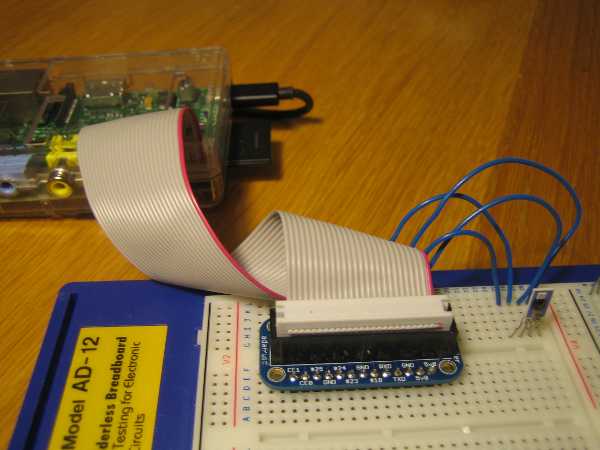 I'm running raspian on my Raspberry Pi. Using the I²C bus involves a small amount of configuration. I took these steps from this page about connecting to an I²C ADC. As root:

Once that's done, we can use i2c-detect to check whether the Raspberry Pi can see the HYT-271:

Ideally at this point we would be able to use the other i2c-tools commands to verify that the HYT-271 is functioning. Unfortunately, despite the name, i2c-tools has a strong emphasis on SMBus rather than generic I²C, and its i2cget and i2cset commands cannot issue raw I²C read and write transactions. So we need some custom code to proceed further.

Unfortunately, the documentation for the HYT series is lacking. The datasheets do not describe what I²C transactions are needed to get a reading from the sensor. Sample code is available on the hygrochip.com site, but the Arduino code seems to have some issues. So I examined their sample BASIC code to produce something that worked. In order to get a reading, you have to:

(The sample Arduino code misses out steps 1 and 2, which will cause it to return the same values all the time.)

You can find my C program on github: