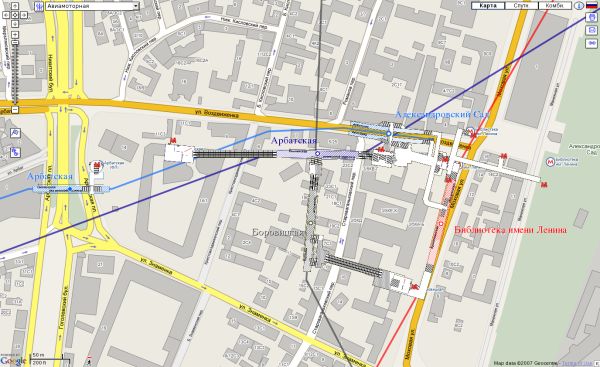 Back at the end of May, I went to Google Developer Day 2007 in London. I saw a lot of interesting stuff, which I didn't write about here because I was busy arranging the wedding, and well, I'm not in the habit of updating this blog at the best of times. So I owe a belated thanks to Google and their staff for providing a day of interesting talks and the surrounding hospitality for free.

There was something that caught my eye while I was there: Before each talk there was a looped video on the projection screen, showing off various applications that have been built on top of Google's APIs. And one of these applications involved Google Maps' streetmap of Moscow, overlaid with the metro stations and lines. The video cut between applications far too fast to see any details, or to note the URL of the application. But some weeks later I found it via de.licio.us: It's at kartametro.info.

If you know Moscow, it's fun to just browse the metro system. One great feature is the subterranean maps of the stations. The screenshot above shows the sprawling Arbatskaya/Bibliteka im. Lenina/Aleksandrovskiy Sad/Borovitskaya station complex, which turns out to be about 600 metres across (it feels a lot bigger when you are down there).

One problem KartaMetro has in common with many Google Maps-based sites is that it can feel quite slow even on fast machines, not because of the time spent talking to the server, but just due to the JavaScript grinding away (in particular, whatever Google Maps uses to draw lines in Firefox). The attractions of moving applications into the browser are obvious for users and developers, but the technology foundations are disappointing in many ways. It will be interesting to see whether the projects to overhaul the Firefox internals can demonstrate that these are implementation issues, and not fundamental flaws.

I guess they are using VML (in IE) and SVG (in all other browsers) to draw the lines. Pretty slow stuff, indeed. The good news is that JS engine improvements are coming not only in Firefox, but in all other major browsers as well - Opera 9.5, Safari 3, IE 8. Take at look at Safari 3 beta - it's seriously fast.